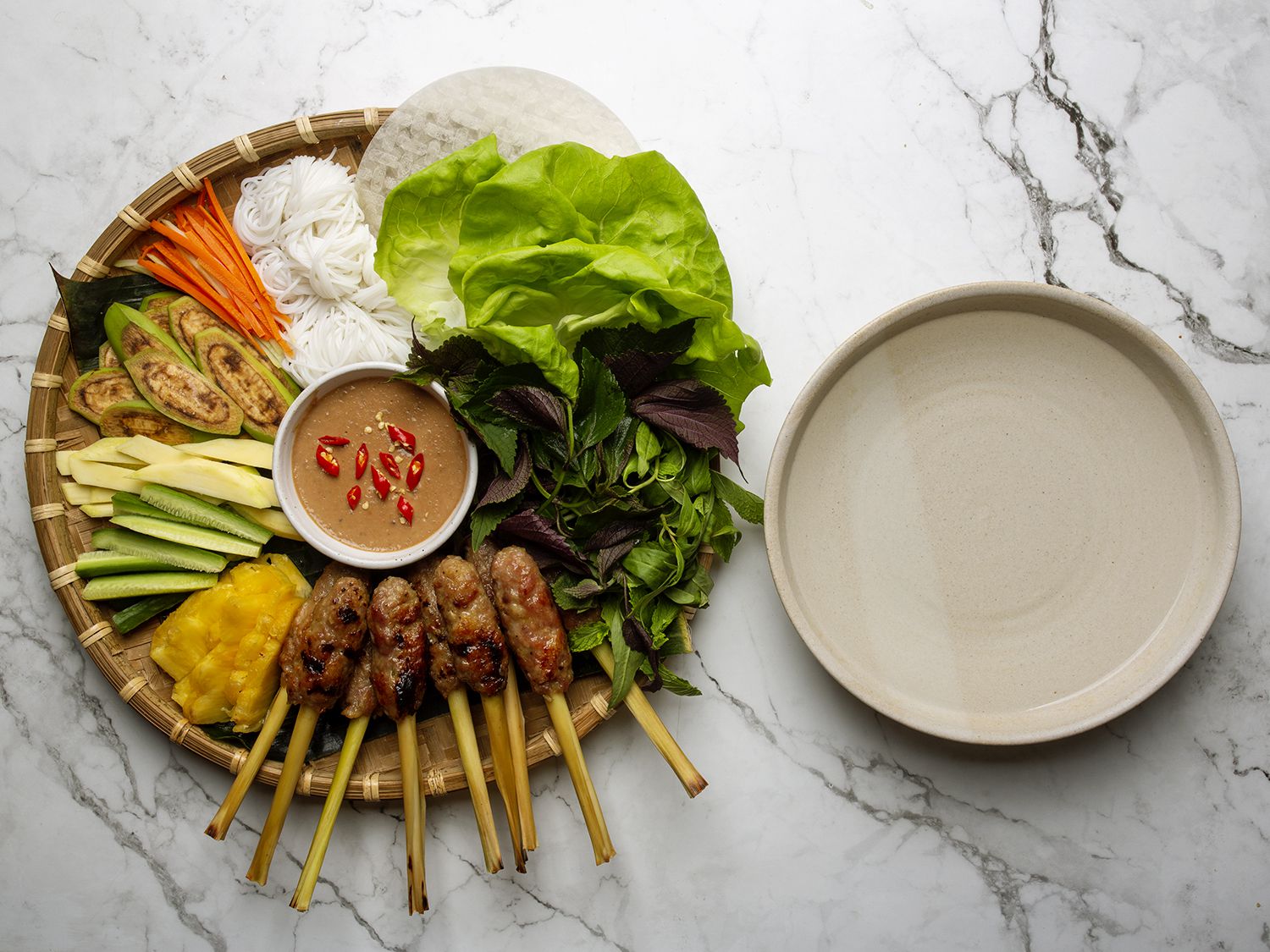 For many people, the first things that come to mind when they think of Vietnamese food are hot bowls of phở and crusty bánh mi. But, for me, the meal that best represents Vietnamese cuisine is the rice roll platter. Often served as a beautiful spread, the rice roll platter can accommodate all our nuanced regional differences, from the North’s more elegant fare and the center of the country’s punchy spices to the South’s sweet tooth, as well as our national commonalities, like our love for rice and our liberal use of raw herbs and vegetables.

Although a rice roll platter tends to require a long list of ingredients, it’s meant to be a simple preparation that’s easily and immediately customizable; think of it as a deconstructed gỏi cuốn, or fresh spring roll, where you can pick and choose whatever you want to include in each roll as you eat. Some combinations are so popular that they’ve become the iconic dish for a particular place, like the cá lóc cuốn bánh tráng (rice paper rolls with grilled snakehead fish) of the South’s Mekong Delta, and the bánh tráng thịt luộc (rice paper rolls with poached pork) of Da Nang, the major metropolitan center of Central Vietnam. Up North in Ha Noi, nem thính cuốn (rice paper rolls with pig’s ears in toasted rice powder) is also a must-try.

Helen Le, the Da Nang-born creator of the YouTube channel Helen’s Recipes and author of two cookbooks, believes rice paper rolls embody the ideal balance of flavor and nutrition in Vietnamese cuisine. “You have carbs from the rice paper and vermicelli,” she says, “and the protein can be fish, meat, or tofu. Then there are herbs and vegetables. Finally, a bold dipping sauce will bring everything together.”

Each of the ingredients included in a rice roll platter is carefully chosen, so I asked Le to walk me through how she picks and prepares each component, and I also asked Lauren Lopez and Vicky Tong, the sisters and recipe developers behind the blog Viet Home Cooking, and Jimmy Ly, chef and owner of Madame Vo BBQ in New York, to weigh in as well.

Making rice paper is a labor-intensive and time-consuming process. It involves grinding rice and turning it into a batter, steaming the batter on muslin cloth stretched over a pot of boiling water to form rice sheets, cutting those sheets into rounds, and then drying those rounds on bamboo screens, which imprint the rice paper with the wavy pattern of the bamboo weave. There are some villages in Vietnam that specialize in producing rice paper, and some families have been in business for over 200 years. Among the most famous is Trảng Bàng, a town in the Southwestern province of Tây Ninh, known for its soft, dewy rice paper. And while the most common form of rice paper is sold plain, there are variations made from coconut milk and sweet potatoes, and some are peppered with sesame seeds, dried bananas, or salted shrimp, among other things.

Even though grocery stores in the US tend to only carry plain rice paper, shopping for the translucent wrappers can still be confusing. Ly advises against the ones made from 100% tapioca flour since they can be trickier to use as wraps. “Instead, look for wrappers made with rice flour or a combination of rice flour and tapioca flour,” he says. “As a quality check, rice paper should also be gluten-free. Go for Three Ladies (Ba Cô Gái) or any labels with the red rose.”

Lopez and Tong also prefer wrappers with added tapioca flour. “They provide a chewier texture and are more pliable,” the duo shares. “Try brands with the term ‘banh trang deo’ on the package.”

Additionally, Le stresses the importance of treating rice paper properly. She cautions against dunking the sheets into water until they’re soggy, the way Gordon Ramsay does in a widely circulated video. Instead, she says, “Use your damp hand to rub its surface and wait for 15 to 20 seconds. It’ll take some time for the sheet to absorb the water.”

The Herbs and Vegetables

On a rice paper platter, raw herbs and vegetables—never cooked—occupy the most space. Leafy greens such as Bibb lettuce and mustard greens work well as a crisp and sturdy base, while vegetables like carrot, daikon, and cucumber add crunch. Other less common textural accoutrements include banana blossoms and lotus stems.

Fruits like pineapple, green banana, and star fruit can also be included, along with a wide variety of herbs, some of the most popular of which are mint, cilantro, basil, perilla, and fish mint (which, despite its name, is not a type of mint, but heart-shaped leaves that smell slightly fishy and have a tangy aftertaste.)

As you put together your own selection of vegetables and herbs for a rice roll platter, you want to have a combination of floral, earthy, bitter, sour, and herbaceous notes, which will help complement the meaty element of the meal and offer contrast to the salty dipping sauce.

In Vietnam, bún, or rice vermicelli is widely available and can be used immediately; there’s no need to boil it in water. It has a shorter shelf life than its dried counterparts in the US, which are often marketed as “rice sticks.” However, the English translations can be pretty confusing, as I have bought rice sticks and rice vermicelli that were not bun at all. Instead, look for the Vietnamese term “bún tươi” (which literally translates to “fresh noodle,” although it’s not actually fresh) on the package—you can never go wrong with that. To use them, cook the noodles in boiling water for five minutes or until they’re no longer translucent and rinse them under cold water to prevent clumping.

There are restaurants that serve rice paper rolls with poached pork throughout Vietnam, but the most famous and common rendition is from Da Nang. It features thinly sliced lean ham with both the fat and the skin intact. The cooking technique involves rolling a slab of the meat into a log and securing it with butcher’s string before poaching.

For those who prefer grilled meat, a good option is nem lụi, a specialty from the city of Huế that consists of fatty pork pounded into a thick paste, then molded on a lemongrass stalk and cooked over charcoal. You can also find a variation of this meat-on-a-stick in Nha Trang, where pig’s skin is added to the mix for some texture. Along the streets of Ho Chi Minh City, vendors lure customers with the smoke from their griller, where parcels of ground beef wrapped in wild betel leaves line up.

In Central coastal provinces, steamed mackerel scad is a regular item included in rice roll platters. The fish is lightly seasoned before being steamed with aromatics such as ginger, onion, and scallion. Travelling southward to the Mekong Delta, where life is blessed with plenty of freshwater fish, snakeheads are a popular choice for both steaming and grilling.

Le and Ly both agree that the dipping sauce can make or break a rice paper roll platter, since the proteins are seasoned minimally and the other components are uncooked.

For Le, mắm nêm (fermented fish sauce) is the perfect accompaniment to Da Nang’s rice paper roll platter. Like fish sauce, mắm nêm is made from anchovies, but while the former is strained to produce a clear liquid, the latter isn’t, and the final product has a gritty consistency. To tame its funk and briny taste, mắm nêm is mixed with sugar, pineapple chunks, and aromatics like garlic and lemongrass.

The proteins in a rice paper roll can vary from pork and beef to seafood like fish and shrimp (I’ve yet to come across chicken). They can be boiled, steamed, grilled, or poached and are cooked with little-to-no seasoning so that the flavor of each component in the platter can shine through.

Those who aren’t a fan of the overtly funky flavor of mam nem can opt for nước chấm, the more common fish sauce-based dipping sauce. Those in Southern Vietnam like their nước chấm sweet and bold, mixing in sugar and chiles, whereas Northerners prefer a milder flavor, blending their fish sauce with vinegar or lime juice, water, and relatively less sugar.

To decide on which sauce to use, Lopez looks at what goes inside the rolls. “I like to have nước chấm with marinated-meat rolls and a thicker hoisin peanut sauce with lighter gỏi cuốn,” she says. Her hoisin peanut sauce is made from hoisin sauce, peanut butter, and Coco Rico coconut soda.

Meanwhile, grilled pork in Huế or Nha Trang comes with a more elaborate meat sauce, which consists of ground pork or liver (or a combination of both) cooked down and thickened with glutinous rice flour. Annatto seed oil is added for an orange tint.

Putting It All Together

Once you’ve gathered all the components and you’re ready to eat, arrange the spread on your dining table, starting with a generous section for the herbs and vegetables, followed by separate serving dishes for your protein, rice vermicelli, and rice paper. You can have a bowl for the water to dampen the rice paper, but I find a spray bottle can do the trick with less mess. Don’t forget a plate and a small sauce bowl for each guest.

To assemble a roll, lay the moistened rice paper flat and place the components in its bottom third, leaving some space on both sides of the wrappers. There’s no hard-and-fast rule for what goes in first or last, but I like to add vegetables, then rice vermicelli, and then the protein. I distribute them evenly on the rice paper sheet, so I can get a bit of everything in each bite. To close it up, fold the space on the sides in, pull the bottom of the wrapper up over the filling and start rolling it away from you, using your fingers to tighten the roll as you go. And feel free to enjoy one right after you assemble.

While rice paper roll platters started out as a casual meal to prepare at home, they now appear regularly on menus, from push carts on Vietnam’s street corners to upscale restaurants in the US, like Madame Vo in New York City. While the ingredients vary, there remains a deep sense of intimacy involved in the dish—whether at home or in restaurants, the process of tearing crisp lettuce leaves and rolling rice paper sheets connects people with the bounty that Vietnam has to offer.

A Missile Strike Hits Shopping Center With 1,000 People Inside

KYIV, Ukraine — A shopping center in Ukraine’s central Poltava region was hit by a Russian