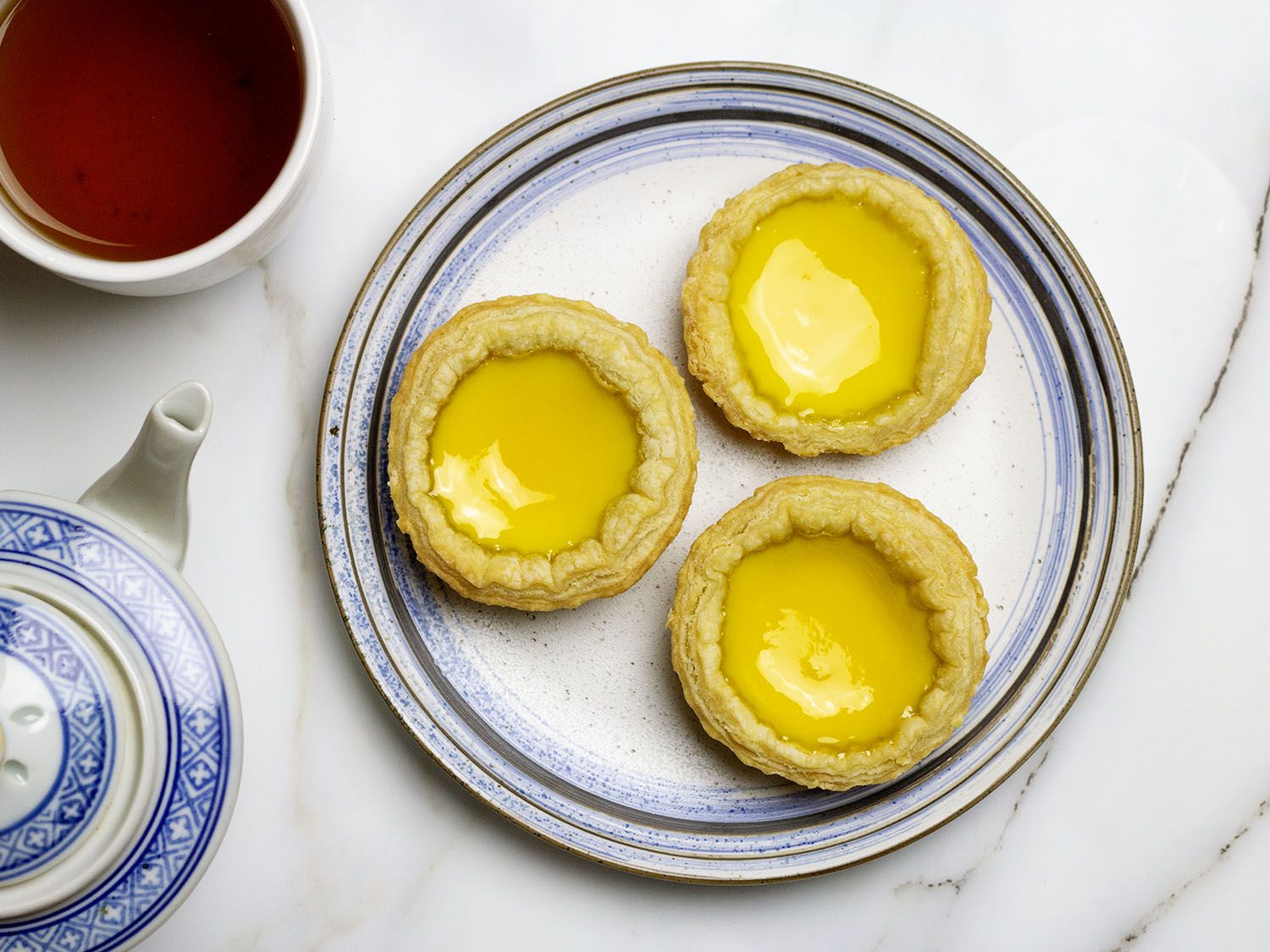 Walk around in any Chinatown and you’ll eventually find yourself browsing the display case of a Chinese bakery. These shops offer cakes and snacks that present a departure from traditional European bakery fare: Fluffy coconut cocktail buns (gai mei bao), crackling pineapple buns (bolo bao), mooncakes, and riffs on Western European items like the Hong Kong Sweet Bun (based on the many styles of English cream buns) are just a few examples of the unique pastries that make up Tang bing, or “Tang-style baked goods”.

Perhaps one of the most well-known of these confections—a standard by which all Chinese bakeries may be judged—is the Cantonese or Guangzhou-style egg tart (daan tat). With its silky, sweet egg custard filling encased by crisp and tender puff pastry, this tart is believed to have originated in Canton (now Guangzhou) around the 1920s, in response to the sudden influx of British businessmen and officials and their love of the British egg custard tart. The southern Chinese city was a prominent international port destination dating to the 18th century, and attracted British chefs and bakers who shared many of their recipes—including egg tarts. (Contrary to popular belief, daan tat are not based on the Portugese pastel de nata. For that, we have the Macau-style egg tart—basically a deeply caramelized version of daan tat. Why Macau? Macau began as a Portugese settlement, so there is some connection there. But the Macau-style tart is a decidedly more recent invention.)

While daan tat had its origins in mainland China, it wasn’t until after World War II that the Cantonese egg tart made its way to Hong Kong, as wealthy Cantonese people migrated to the major port city. It’s in Hong Kong that the pastry was perfected, helping to catapult the city’s status to global food destination.

What are the major differences between a British egg tart and a Cantonese egg tart? For one, British egg custards often employ custard powder, which was a relatively unknown ingredient to Cantonese cooks at the time. Instead, the filling in daan tat is simple: eggs, sugar, milk, and maybe vanilla extract. Second, Cantonese bakers turned to a flakier, multi-layered, more tender puff pastry crust in favor of the traditional dense short crust. (In a circuitous move, Cantonese chefs later developed their own short crust version in response to rising demand for egg tarts. Bakers found that the short crust was easier and faster to produce, which improved profitability. Still, the puff pastry version is the OG and, in my opinion, just better.)

For the purposes of this recipe, I decided to stick to the Hong Kong style of egg tart, which I think is the gold standard. This version is smaller (around 3 inches in diameter) than its Guangzhou counterpart. But the most important quality of the tart is the puff pastry: Light, delicate, and super crispy with multiple layers. Puff pastry is laminated, made from alternating layers of dough and fat. (Entire books have been written about dough lamination. It’s a complex technique with so many cool applications. I won’t get into the nitty gritty here, but all you need to know here is that it’s the key to a good egg tart.)

Chinese puff pastry differs from European puff pastry in a couple ways. First, where European puff pastry consists of alternating layers of dough and butter, Chinese puff pastry is traditionally made with lard or shortening. This kind of puff pastry features alternating layers of dough and an “oil dough”—a mixture of fat and flour that forms a malleable paste.* These small adjustments yield a pastry with just as much crispness and flakiness as traditional puff pastry, but with a more tender, delicate structure akin to a short crust. “Adding lard makes the pastry flakier and [gives] a unique aroma,” says Wong Wai-Tim, executive dim sum chef at Royal Garden Chinese Restaurant in Hong Kong. “Pastry made with just butter would make it crunchy and sharp on the palate, while adding lard makes the texture flakier and lighter. A mixture of butter and lard would be the best.”

After comparing the lard-dough method to a more traditional puff pastry formula (and even quick-puff methods), I did find that the lard-dough was more tender, and the layers more delicate when baked. On the other hand, I preferred the butter flavor to that of deodorized lard (though this is definitely a personal preference). Finally, lard can be a little harder to source in some parts of the country. So was there a way to split the difference? Was Wong Wai-Tim’s observation correct? Could I achieve the same textural effect with butter alone?

For Chinese puff pastry, the oil-dough layer can contain as much as 80 percent flour relative to the weight of fat. That’s a considerable amount of flour, approaching a short crust or sablé dough. After baking this dough, I noticed smaller layers of short crust as the fat melted and water evaporated, which likely contributed to its coveted delicate texture. (Additionally, the lamination process involves rolling and folding the dough multiple times—systematically pressing the layers together. The high-flour fat layers of Chinese puff pastry (which could be thought of as suspensions of fat and flour) may be gradually integrating into the lean dough layers over time, which would further tenderize them. At least, that’s my best guess explanation for the tenderizing effect.)

As far as dough handling, I found that the Chinese-style puff pastry was a little easier to roll out than classic puff pastry dough. I suspect that because the two layers were less disparate—that is, there was some flour in the butter layer—they were texturally more similar than a lean dough layer and a pure butter layer. But again, that’s just conjecture.

The main difference between butter and lard, beyond their animal source, is that lard is pure fat, while butter is an emulsion of fat and water. Given that extra water, I could expect some greater steaming and puffing potential in baking. Lard also has a different texture compared to butter at room temperature; it’s softer, so it tends to roll out in a laminated dough more easily. The downside is that lard tends to incorporate into the dough more readily (especially if your rolling technique isn’t great), so you have to be more careful to keep the layers separate.

To test this difference, I tried substituting butter for lard, using the same high proportion of flour in the “oil-dough” layer—a hybrid method of classic puff pastry and the traditional lard dough.

The dough worked pretty well. It produced similarly tender and flaky layers as the lard dough, with the added benefit of extra separation between layers—likely due to the water in butter converting to steam during baking. Still, the layers were not as ultra-tender as I would have liked.

How could I tenderize the layers even more, without resorting to lard? I thought about enriching the lean dough layer; ingredients like butter, cream, eggs, and sugar can all soften a dough and produce a more delicate texture. After testing multiple strategies, I found that simply adding an egg yolk did the trick. The fat in the yolk tenderized the layers just enough to emulate the flaky layers of a lard-based dough. After all, these are egg tarts: it was only fitting to include egg in the dough itself.

Now that I had a working puff pastry, all that was left to do was to prepare the custard filling. Here I stuck to the traditional formula of eggs, sugar, milk, and vanilla extract. I found that adding too much milk made the color of the custard disappointingly pale. To highlight that natural yellow color—without resorting to yellow food dye—I substituted a smaller amount of evaporated milk for the whole milk, and cut it with a little water. The water did not dilute the color as much, and it even resulted in purer egg flavor. The evaporated milk provided the same richness as milk, but I could use less. Finally, I used a higher proportion of egg yolks—both for added color and egg flavor.

Putting It All Together

We’ve got all the components for the tarts. Here are some helpful tips as you go along.

When in Doubt, Work Cold

Temperature is the single most important factor when working with any laminated dough. The key is to roll the dough when it is pliable—not stiff or overly soft. If the butter layer is too cold, it won’t roll out without shattering and breaking; in this case, simply wait until the butter warms slightly and becomes more malleable as it sits at room temperature. On the other hand, if the butter is too soft, the layers could be mashed together too easily; there’s no saving a dough like this if the butter is too soft. Overall, overly soft or warm butter is a far worse problem to have. For this reason, it’s best to keep the dough cold—even in the freezer—between each round of rolling.

Laminating dough involves lots of rolling. It’s a skill that takes practice. Here, a ruler can go a long way toward ensuring success. A ruler helps keep the dimensions of the dough in check, and provides a guide for rolling the dough out uniformly. Remember: A uniform dough means uniform layers.

I also found it important to roll the dough very thin prior to cutting and lining the tart molds—thinner than you would expect. Why? The dough expands considerably as it bakes, and if the dough is too thick, the ratio of crust to filling will be thrown off. Roughly one eighth of an inch seemed to be the ideal thickness.

Bake It Hot (But Not Blazing)

Puff pastry bakes best in a hot oven. The hotter the oven, the more dramatic the rise. But for these tarts, I wasn’t looking for deep golden brown or any hints of caramelization in the filling. So I found the ideal baking temperature around 400°F (205°C)—hot enough for rapid expansion, but low enough for the custard to set without browning.