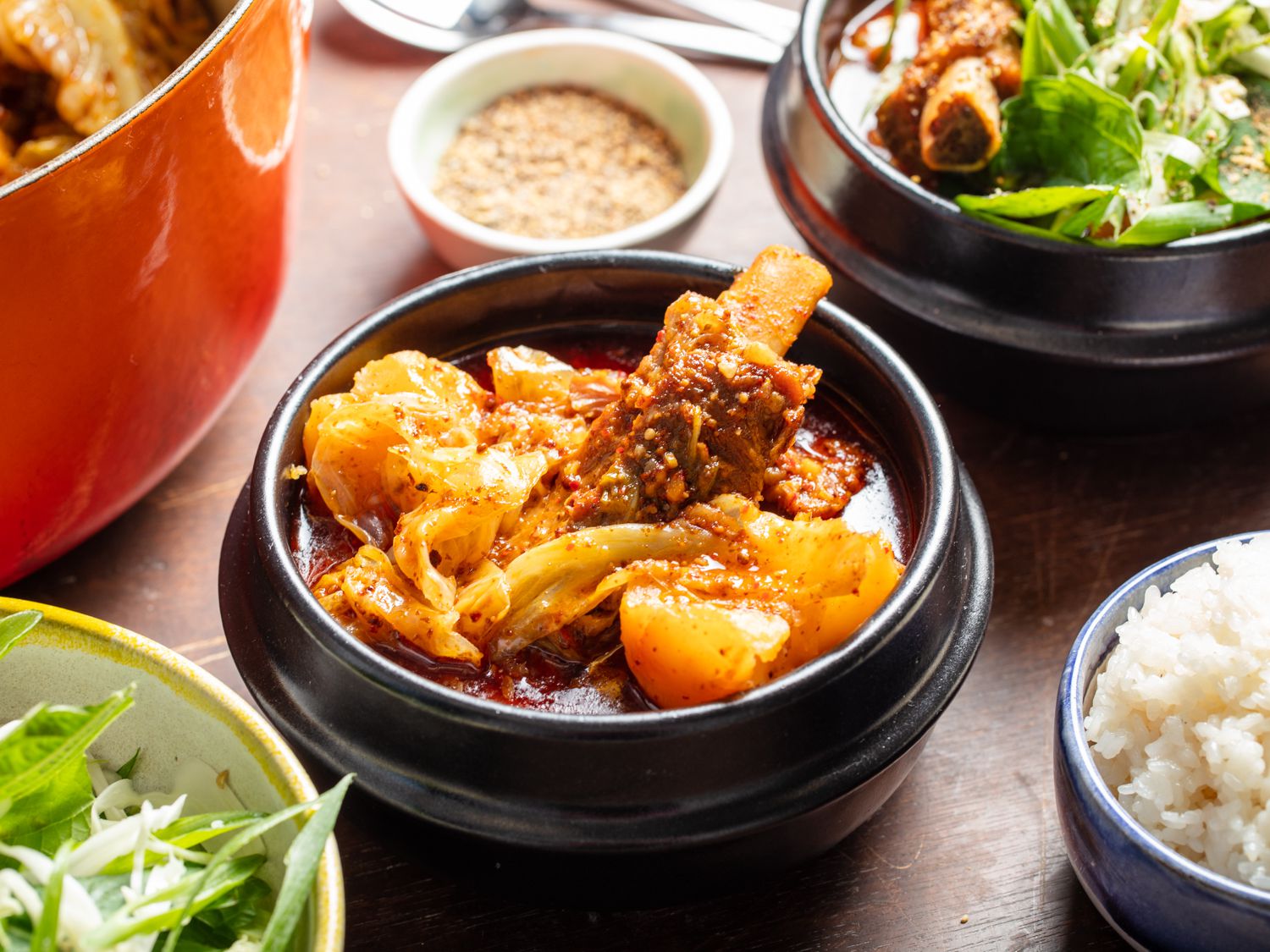 The best remedy for the fatigue that sets in during long winters is a steaming bowl of rice and a dolsot of gamja-tang, a spicy pork bone stew, thickened with potato and crushed perilla seeds, topped with sliced scallions, fresh chiles, and torn perilla leaves. It’s also a dish that showcases the flavor and utility of kkaennip, or perilla, which is a defining ingredient of Korean cuisine. Often mistranslated as “wild sesame,” perilla’s crushed seeds are nutty and slightly bitter, often used as a thickening agent in soups and stews, and its fresh leaves are used as a refreshing garnish to cut through the fatty unctuousness of meat.

Choosing and Cooking the Pork

Gamja-tang is classically made with pork neck bones, which are easy enough to find at supermarkets and butchers, but I choose to use pork spare ribs for my version. To make the browning process more efficient, I brown St. Louis-cut racks of ribs that have been cut into 5- or 6-rib portions and then cut them into single rib pieces after they’ve been seared and rested for a bit. Individual ribs are a little easier to maneuver while eating and, unlike neck bones, they don’t need to be blanched. If you can’t find pork ribs, boneless pork shoulder also works, however I recommend using about three-fourths as much boneless shoulder meat—1 1/2 pounds of pork shoulder, cut into 2-inch pieces, instead of the 2 pounds of spare ribs called for in the recipe.

While there are many versions of gamja-tang that call for throwing all the ingredients into a pot and simmering everything at once, my version calls for the ingredients to be added in stages, so that each component is cooked to the perfect texture while still becoming a part of a cohesive, hearty stew.

I start by browning the ribs in batches in a Dutch oven, to ensure they’re browned well. After I remove the ribs, I add ginger, garlic, onion, gochugaru, and doenjang to the pot and cook everything over low heat in the rendered pork fat. The liquid released from the aromatics hydrates the gochugaru chile flakes, which release their floral aroma and give the mixture a beautiful deep red hue.

Next, I add chicken broth, fish sauce, and potatoes to the pot, along with the seared pork ribs. It’s important to give the ribs and potatoes a half-hour head start before adding quick-cooking daikon radish and green cabbage leaves, which would otherwise turn to mush by the time the potatoes and ribs were tender. This is also why I choose to layer the green cabbage over the surface of the stew like a cover, as it will cook a little bit slower, steaming as the meat and root vegetables simmer underneath.

Once the daikon radish and potatoes are tender, I stir in crushed perilla seeds that have been soaked briefly in water. The perilla seeds add a nutty, herbal note, and thicken the stew along with the potatoes, which will begin to break down due to their extended cooking time. And because of the way the ingredients have been added, as soon as the pork is tender, it’s serving time.

I serve the stew in individual bowls and top them with torn perilla leaves, sliced scallions, thinly sliced cabbage core, and chiles to add a refreshing crunch. Alongside a bowl of hot, white rice, it’s a meal that might even make you wish winter was longer.

Ukraine’s dwindling hopes in Luhansk Province Lysychansk, the last major city held by Ukraine in the