It has been a year of career milestones for St Helens captain James Roby and, on Sunday, he is set to add another to his list, breaking the record for the most Super League appearances.

Known for his consistency and mental toughness, Roby has picked up a long list of individual and team accolades across a distinguished 19 season-long career, guiding the current St Helens team to a three-peat of Grand Final victories and looking for a record fourth in a row in 2022.

Whilst individual honours have come throughout Roby’s career, winning the Man of Steel and Harry Sunderland Trophy, his 19th and possibly final season has also provided some landmark moments, making 500 appearances for his hometown club and on Sunday another could be added to the list as he will move onto 455 Super League appearances. 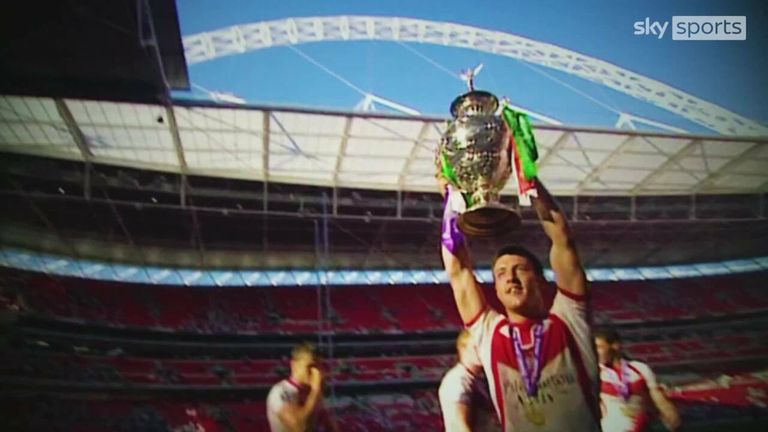 With every other player in the top ten Super League appearance standings retired, it will be a long time before another player comes close to his achievements and that is why those who have played with him, against him, and coached him have lined up to recognise one of Super League’s greats, paying testament to a humble, respectful and resilient leader who has lived out a childhood dream.

Kevin Sinfield MBE: No one better to break the record

For Sinfield, there is no one better to break the record he holds, Roby deserving “everything he gets” when he runs out against Hull KR on Sunday.

“Where do you start. He is a wonderful human being and one of Super League’s best ever, just what a player,” said Sinfield.

“He has been the same bloke the whole way through and I am absolutely delighted for him.

“He is just Mr. Consistent and he just delivers and keeps delivering and I don’t think I have ever seen him at less than a nine out of 10 game.

“You always just knew that you had to be on it at every single play with Robes.

“If he decided to do it at marker, he would burn you, if you shot out the line, he would throw a dummy and go through, he could kick, he didn’t kick often but had that up his sleeve as well.

“I don’t know whether there will be another one, he is a special guy.

“People will think I am disappointed but I am not. Records are there to be broken and there is no one better.

“If there is someone who is going to beat it he would be number one.

“He is just a great guy and when you have got someone leading your group who is so well respected, who just delivers every single week, is just consistent and plays at nine or ten out of ten every week guys turn up for you and they have continued to do that.

“Never mind letting your team down, he will always be at the forefront, flying the flag for his team and long may that continue for him because he deserves everything he gets.”

Coming through the St Helens system at the same time, James Graham and Roby played in some of the most successful St Helens sides in Super League history and Graham remembers with fondness building his professional career alongside someone he had played against since eight years of age.

“He made his debut in 2004 and now in 2022, he has maintained this consistent level of just sheer brilliance.

“I have never seen him have a poor game and everything he does is one hundred miles an hour, he is always leading the chase, he does the one-percenters and he has done it year after year after year.

Graham returned to St Helens in 2020 for one final season with the club and won the Grand Final in the most dramatic of circumstances, Jack Welsby jumping on Tommy Makinson’s drop goal attempt in the final seconds to produce one of the most iconic moments of the Super League era.

For Graham, that moment was made all the more special as it was shared with the St Helens stalwart.

“Words can’t do it justice what it meant to be alongside my old mate JR and lift that Super League trophy with him for one last time.

“Obviously we did it together in 2006 and then we lost a couple along the road but 2006, when you are 20 and you win everything that year and you think it is going to happen all the time then you get a bit older and you learn it doesn’t.

“But the opportunity to do it with him and take that opportunity will be memories that will be with me for the rest of my life.

“What a player to do it with, even now to watch him.”

Having played alongside some of the greats of both Super League and NRL alike, the former prop knows what it takes to be consistently at the top of your game for so long and that is why for him, Roby is what it is to be superhuman.

He added: “Lots of words get thrown around like legend and unbelievable but what he does on a week to week basis, if you look at it, is almost unbelievable and the qualities that he shows.

“He is going to break this Super League record and I get a bit funny with numbers and milestone games because they are just numbers.

“You dream of playing just one game as a kid but the way this lad plays, it is like nothing I have ever seen so for him to break this record with the way he goes about his business, it is just not right.

“There are some scientists out there who should do some experiments on JR just to make sure he is human. 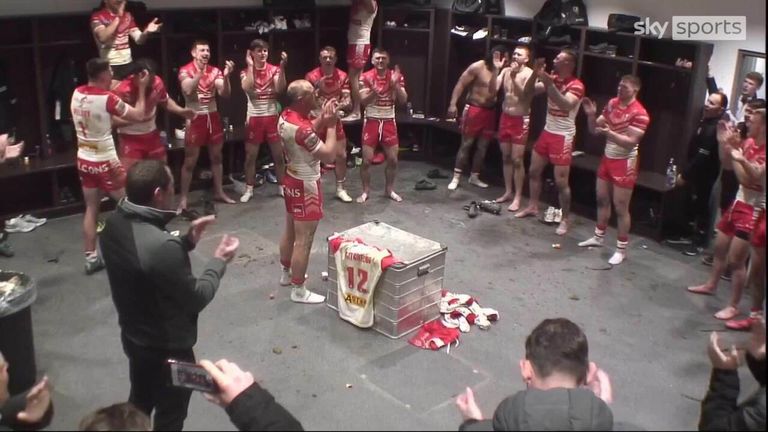 James Roby led the post-match celebrations for St Helens after beating Leeds Rhinos in his 500th appearance for the club.

James Roby led the post-match celebrations for St Helens after beating Leeds Rhinos in his 500th appearance for the club.

“What a player, I am so pleased for him to break this record and I know he won’t acknowledge it, it will be just another day for him, he doesn’t take his rugby home with him but hope one day he gets the chance to just look back and reflect and have a smile at everything he has managed to do.

“Not just for himself but his family as well and the St Helens community.

“To do it all with the same team, where he grew up I don’t think he realises this but what an achievements.

“Huge congratulations to you JR, you thoroughly deserve this.”

Jamie Peacock MBE: He will go down as one of the game’s greats

Jamie Peacock was on the other side of the infamous St Helens v Leeds Rhinos rivalry of the late 2000s and always remained in awe of the consistency Roby brought every time he stepped out onto the pitch, presenting a constant challenge for the Rhinos side to deal with.

He said: “I just think what is special about Robes is his ability to play consistently excellently.

“You watch him play and everything he does, he competes for absolutely everything, he is super skilful, he can read a game, he is super tough and he does those four things every single week.

“He will go down as one of the true greats of Super League and in the wider game as well I would imagine beyond Super League. 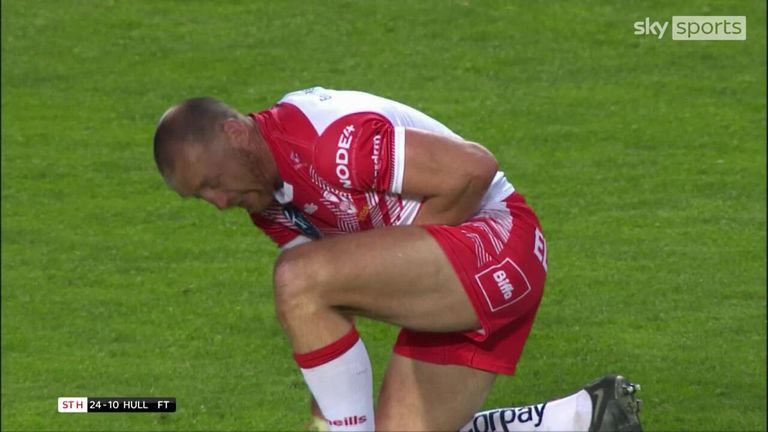 St Helens’ Tommy Makinson gives his thoughts on teammate James Roby popping his finger back into place after dislocating it during the game.

St Helens’ Tommy Makinson gives his thoughts on teammate James Roby popping his finger back into place after dislocating it during the game.

“I don’t think St Helens would have had the success they have had over the last 15 or 20 years without a player of the calibre of James Roby.

“What you have to remember about James Roby is that he is the most important player on the pitch, he touches the ball more than anyone else and every decision he makes has a ripple effect and he is the guy who has to make the most tackles but he still has the fitness and mental toughness to more often that not make the right decision.

“What makes him so outstanding is that he doesn’t bow down to fatigue, he doesn’t make errors and in fact, it brings the best out of him.

“He is a player that people will look back on in 30, 40, 50 years time and people will say what a player he was, he was a diamond.

Ian Millward: He is a great role model

Coaching St Helens from 2000-2005, Ian Millward witnessed James Roby as he worked his way up the ranks as a young member of a very talented squad.

Indeed, it is this patience and love for the St Helens club that Millward has continued to admire about Roby over his long and successful career.

“The biggest thing I have found special about James Roby looking over his career is his ability to be patient and loyal,” said Millward.

“When he came into the ranks at St Helens when I was coaching there, they had probably one of the best hookers in the game in Keiron Cunningham then he had an England international emerging in Mick Higham.

“I think it is a rare thing in the modern game now, people who are patient and loyal.

“We can talk about how great he is as a player and what he brings to the team and how brave and tough he is and how he is a winner but it is a rare quality to have patience and loyalty.

“He is probably one of the nicest guys you are going to meet and his manners are absolutely of the highest order. 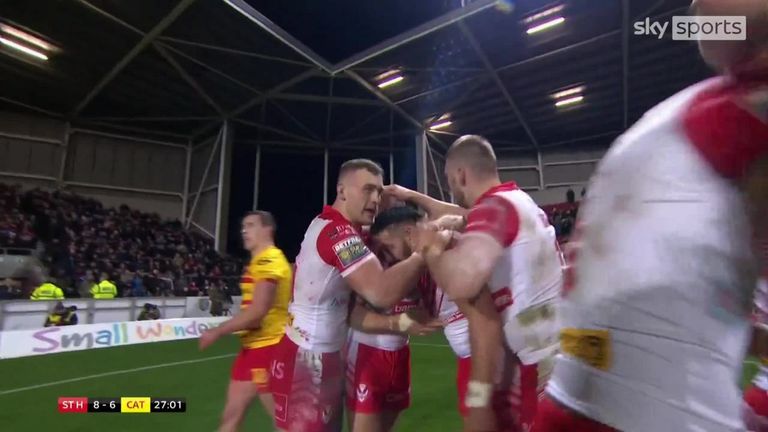 St Helens stalwart James Roby showed his class once again as the home side went ahead against Catalans Dragons.

St Helens stalwart James Roby showed his class once again as the home side went ahead against Catalans Dragons.

“One of the things I love watching him at the moment is that he might not have a greater impact as he had in the first 10 years in attack or whatever but how solid he is defensively and his desire to stop tries.

“I would just like to think Robes typifies what every club aspires to when they bring a kid through- that loyalty that he has for the organisation but also that respect.

“Every player he has played with he has respect for and in turn his game respect.

“If you could have more James Roby’s, the more chance you have of winning trophies and that is where St Helens have been very lucky that he has dedicated his life to that.

“He is just a great role model.

“The achievements are a by product of what they are as a person.”