Jayson Tatum was the leader in points for the Boston Celtics and the man they always looked to when they needed offensive inspiration against the Miami Heat.

There has been a feeling for a while now that his time has come in the NBA and Tatum delivered a huge performance in Game 7 to seal the Eastern Conference title for the Celtics and the Larry Bird Eastern Conference MVP for himself.

It feels fitting a Boston player was the first to lift the award named after the franchise legend and Tatum delivered a performance Bird would have been proud of scoring 26 points, grabbing 10 rebounds and adding 6 assists in 46 minutes.

“Honoured,” was how Tatum answered when asked how he felt about winning the award. “Still doesn’t even seem real right now. I’m just extremely happy and grateful, you know, for all of this.

“Regardless of how long I’ve been in the league, I’m not too far removed from, you know, when I was in high school, and when I was dreaming about moments like this. still feel like a kid as sometimes that I’m really, truly living out my dream.

“To be the first person to win this award [named] after Larry Bird still hasn’t like sunk in there yet. I’m going to take it home and show Deuce tomorrow.”

Tatum’s adorable four-year-old son has become somewhat of an unofficial mascot for the Celtics during this postseason run and is well and truly part of things in and around the locker room.

When Tatum was not much older than his son is now, he watched the late Kobe Bryant light up the basketball world on the biggest stages of all.

In tribute to the man who left such a massive hole in the NBA community after his tragic passing, Tatum wore Bryant’s armband and admitted he watched some highlights from the Los Angeles Lakers legend, who was so great in clutch situations himself.

“You know, obviously, that was my idol,” Tatum said. “That was my inspiration, my favourite player. The shoes that I’ve been wearing the last couple games were dedicated to him.

“Today, before I took my nap, I do it sometimes, I was watching some film, some moments from him and his career. This is the biggest game of my career thus far and I wanted to wear that armband to honour him and kind of share that moment in a way.”

Tatum may be doing a little bit of everything on offense now but he has been very consistent defensively as well which, along with his playmaking, has been one of the major leaps in his game.

His confidence is as high as it has ever been – in both himself and his team-mates.

“Not trying to be arrogant or anything, but I just really believe in myself,” he said when asked about his level of belief. “I really believe in our team. It’s the biggest game of the season, of my career, and I just have faith that we were going to give it all we had, regardless of the outcome.

“It feels great, honestly. You know, some of those guys been at Eastern Conference Finals, four times, [it was] my third time. We know we want to win championship but to get over this hump, in the fashion that we did it, obviously, we took the toughest route possible.

“When you lose those series, obviously, it hurts and it’s tough. But you never forget it. I think that’s what we all have in common. We have all been through those tough times and we remember how that felt. We didn’t want to feel it again leaving here tonight so we left it all on the floor.” 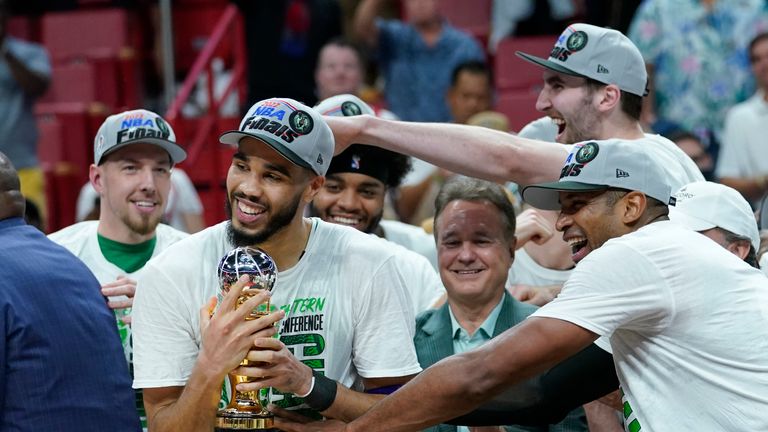 Now, the Celtics will face the Golden State Warriors in the NBA Finals, beginning late on Thursday night live on Sky Sports.

It represents a first for every player in the Boston locker room, while Golden State are veterans of the biggest stage.

Tatum is ready for the challenge that awaits.

“This is a big accomplishment, we haven’t been at a championship yet,” he said. “I think it’s all right, to be proud of ourselves today and enjoy this. We’re not satisfied, we’ve still got a long way to go.

“Clearly it’s my first time getting a championship. It is not easy. And we know we have a tough task ahead. You know, they’ve been there many times, they’ve won many times. So I’m looking forward to it.”

The rush of live NBA Playoffs games continues on Sky Sports this week – see the list of games here and subscribe to watch the live action.