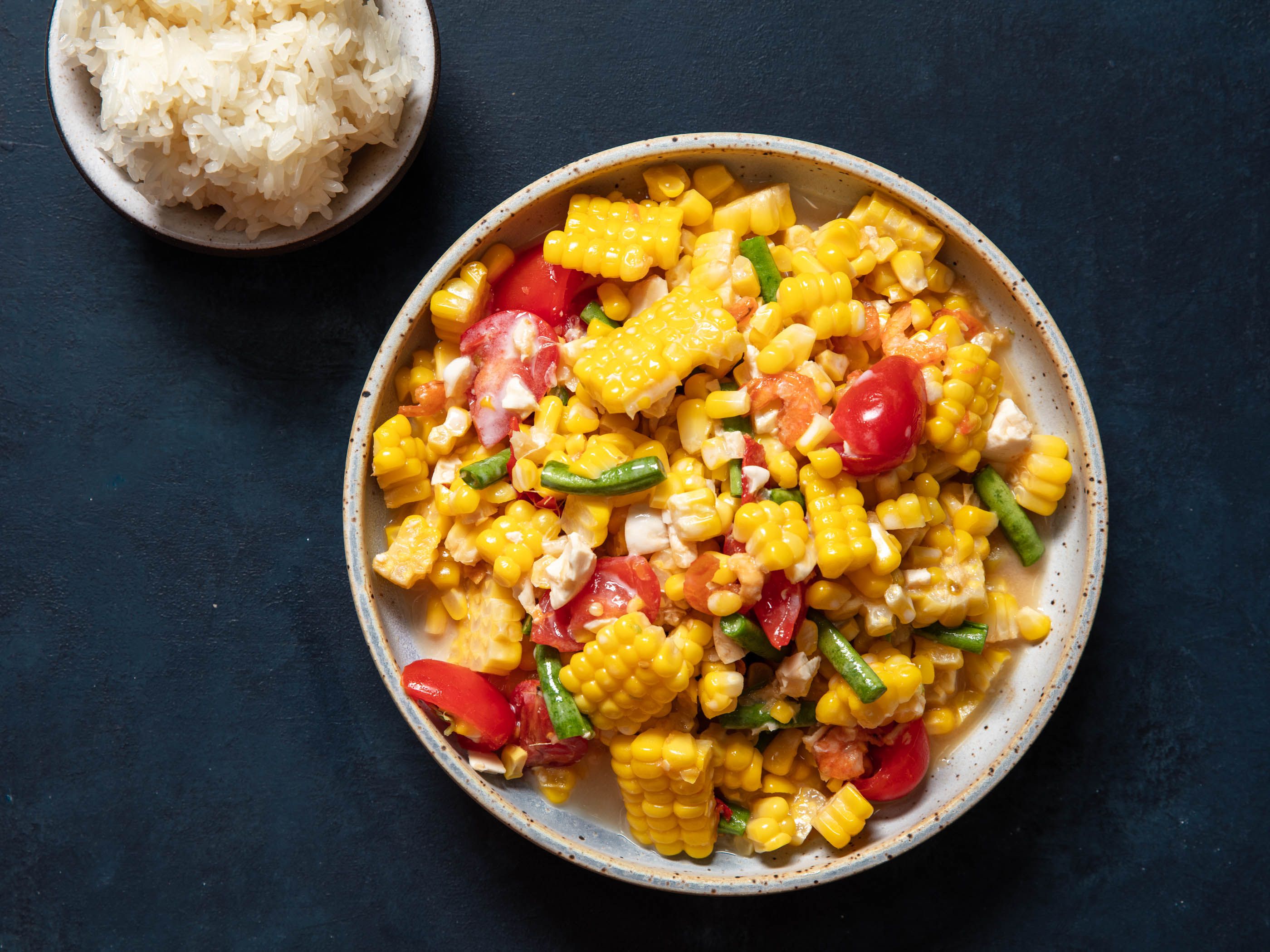 When fresh corn is in season, you don’t need to do much to let its flavor shine. I love chomping down on an ear of grilled or steamed corn on the cob, but when I’m feeling a bit more creative, I like to make tam khao pod kai kem, a bright and refreshing Thai salad that pairs the sweet pop of corn with creamy coconut milk and a savory, sour, and sweet dressing made with fish sauce, lime juice, and palm sugar. Crisp long beans and juicy cherry tomatoes add texture, Thai chiles lend subtle heat, and dried shrimp and salted duck egg reinforce the salad’s savory side. This is the perfect side dish to celebrate the last of summer produce.

Tam-style salads are pounded salads found in Lao and in Thai cuisines. Som tam, which combines the word for sour (som) and the term for pounding in a mortar (tam), has become synonymous with green papaya salad, which is easily the most well-known tam-style salad outside of the region. But there are countless variations on the theme that use ingredients beyond green papaya, such as cucumber or, in this case, corn. While the components of tam-style salads can vary, the process for making them doesn’t change much.

Like a prik gaeng (curry paste), a som tam comes together by pounding ingredients in a mortar and pestle. Components are added in stages, starting with fibrous aromatics, and gradually working toward more delicate ingredients, pounding and mixing with the pestle along the way. Unlike curry pastes, the goal here isn’t to pulverize the ingredients into a fine paste, but rather to bruise and break them down just until they release their aromas. It’s a much quicker and gentler process, and it typically requires a different style of mortar and pestle: wooden or clay mortars are used for tam-style salads, rather than the heavy granite ones used for curry pastes.

For tam khao pod kai kem, I start by simmering whole ears of fresh corn in coconut milk until they are just tender. The corn picks up a subtle layer of fatty richness from the coconut, while also imparting its own flavor to the coconut milk, which I drizzle over the salad right before serving. Once cooked and cooled slightly, I cut the corn off the cobs in planks rather than individual kernels—to give the salad more interesting textural contrast—and set them aside.

With the corn squared away, it’s time to turn to the mortar and pestle. First, I pound garlic, chiles, dried shrimp, and palm sugar for a few seconds until just broken down slightly. I then add long beans and a handful of cherry tomatoes to the mix, and pound them just until the tomatoes split and release some of their juices. I stir in fish sauce and lime juice to balance out the sweetness of the palm sugar, which I fully dissolve in the liquids by gently working the pestle around the mortar in a circular motion. Finally, I mix the reserved corn and a crumbled salted duck egg into the salad with a spoon, so as not to break up the clusters of corn. The salted duck egg lends briny richness to the dish, with a texture and flavor that is somewhat reminiscent of Italian ricotta salata, and it serves as a welcome foil to the sweet corn. The resulting salad bursts with pops of crunch from the coconut-infused corn and bruised long beans, the flavors held together by the the nicely balanced sweet, savory, sour, and salty dressing. It’s a salad you’ll want to make over and over again.